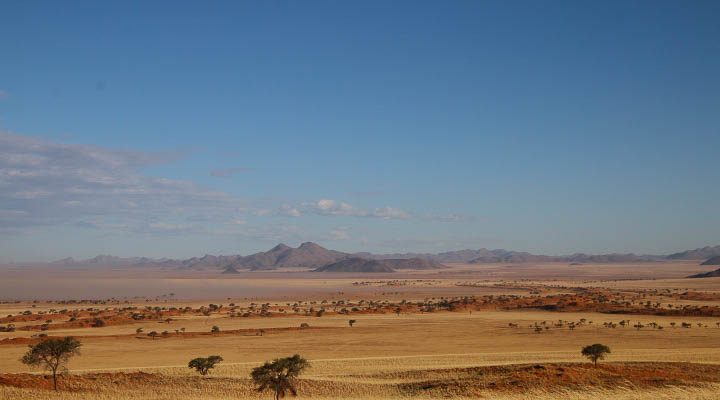 The wind played havoc all night and was still howling this morning. There is sand everywhere.

Looks like we aren’t getting away from the sand and wind – there are road signs everywhere with warning. Oh joy!

We are in the middle of a sand storm – the sky looks like a dark haze, but is in fact sand. You can see the sand being blown across the road surface.

Finally, out of the sand and into the rocky mountain and yellowish grassy, spinifex type, plains.

We take a detour to Duwisib castle. The castle was built in 1909 for a German nobleman and has been restored with much of the original furnishings. This was an interesting stop, but probably wouldn’t do it again, as it was more a family home than a castle.

We reach the small town of Aus- finally some decent tarred road – gee we have missed you! Back up to 120kph. Well actually that’s not true, as David has been doing that on a lot of the dirt roads as well!

Decide on another detour- going into Luderitz, we need to find a bank to do a currency exchange- we only have 180 rand- approx. $18.00 and nowhere is taking card at the moment or the lines are down.

Luderitz is an old town founded in 1883 and has a natural harbour for boats. The wind has picked up again and sand is blowing everywhere, at one point it felt like we were at Perrisher, but instead of huge snow banks built up along the road side it was banks of sand. There are local workers trying to push it back off the road surface.

Woo hoo we have some money – only after going to 3 different banks in town! Lunch is at the “Cosy Corner Coffee Café”, which promised free wifi, but as usual it wasn’t working! Burgers all round. Much to Brendan’s disgust, we grab a few things from the local Sparr & Topps stores. We’re not sure where he thinks all the junk food comes from, but he complains whenever we have to do more shopping. We don’t have a lot of room in the fridge/freezer or storage for other things, so we are continuously topping up, when we reach a large enough town.

About 10km, on the way out of town, is the famous Kolmanskop- an abandoned ghost town (used to be a diamond mine town) the buildings had been abandoned when the mining became unproductive , over the years the sand has started to reclaim them, filling some rooms. Unfortunately the wind is still bowing and we decide not to go in – would wreck the camera’s and be very unpleasant for us, we stop on the side of the road and snap a few pics.

We arrive at the reception for the campsite and have a drink at the bar, Natalie, the bar attendant, advises that the winds should ease tonight. There is a small amount of internet here, so David and Brendan catch up with what is happening in the world.

The reception is about 2km of dirt tracks from our campsite. There are only 10 sites ours is number 7. All of the sites have a windbreak and are nestled around large camelthorn trees. They are not very private and are very close to each other. We have gotten used to private campsites, and when there are other campers within 50m-100m from us, it feels cramped!

After dinner, which took forever, due to the wind, we packed up for an early night- really so we could escape, the dreaded breeze! Unfortunately, the South Africans in the adjacent camp site, have decided to play their music, and laugh, loudly around their fire. We’ve gotten used to secluded, and quiet, campsites so this is irritates David, immensely