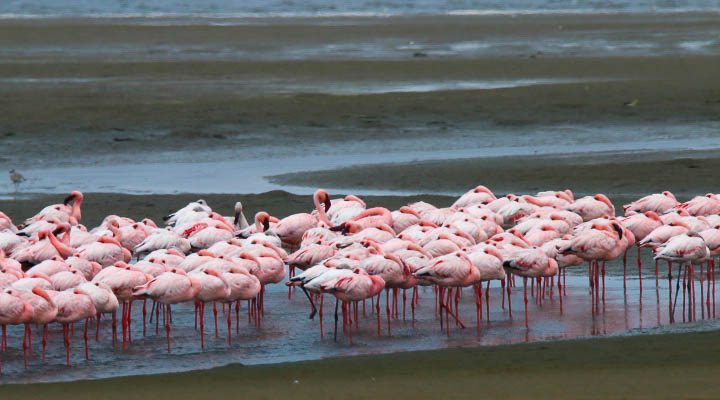 It was a peaceful sleep, with the sounds of the oceans waves crashing to shore crooning us. At breakfast David noticed a guy at he next table wearing a xxxx shirt, they were Aussies from Brisbane, they were flying out today.

It is damp (and cold – only 20 deg so far) due to the sea fog blanketing the area, it takes a few hours before the sun eventually burns it off, this occurs daily – is similar in San Francisco

We were picked up by Desert extreme 4×4 quad bike excursions staff and taken to their office to sign waivers etc. Our guides name was Max, he was a uni student & this was his part time job over the school break. We put on hair nets and full-face visor helmets, then were led to our quad bikes. Mine was number 30 and looked like a beast. We have to travel in single file, I had to follow Max, followed by Brendan & David had to bring up the rear. After a quick lesson on where brake / accelerator were located we were on our way into the mighty dunes. Luckily we wore long pants and a jumper – it was cold! Though I only had on my cardigan and it kept opening up, even after I would tuck it in… It wasn’t long before I was lost, all you could see all around was large sand dunes. No way I would have made it out of there alive if I got separated. Up and down and around on the peaks we road, I reached speeds of 55km/hour, though Brendan and David went a bit quicker – they left a bit of a gap so they could push it.

There was a big drop you had to go down, I thought Max was going to take photos so I stopped at the top causing Brendan to stop behind me, on the steep slope, and got bogged – woops. David had to get off, and go and push him up that last few meters. We stopped on the top of a large peak and had a few photos – all you can see is sand dune after sand dune, it is quite daunting. The 2 hours went by really quick and soon we were back at their facility and driven back to the Stiltz.

We showered and then decided to travel to Walvis Bay- this area has one of the largest concentrations of greater & leaser flamingos in the southern African area. We pass huge tankers off shore and large circular oyster farms floating about 250m off the shoreline. New oceanside estates are being built, but their back fences are already half covered in by the sand- that will be an on going job to keep the sand levels down. As you get closer to the town the roads become lined with huge cycads on both sides. We make our way down to the lagoon area and firstly see the greater flamingos – these are whiter in colour.

Further down the road we pull into another section where there are hundreds of lesser flamingo – the more pink coloured ones. We take plenty of pictures & watch them for a while before David gets bored and we have to go.

Once, back at Swakomund, we walk around the streets for a while, but most things are closing due to it being xmas eve. We hadn’t realised, as we had been keeping track by days, not by date! We find a pizzeria open and have a late lunch before heading back to the Stiltz, we decide on staying in for the night.